The septum is used to seal the injection port and it is an interface for injecting the sample. The septa are made of polydimethylsiloxane - a similar polymer is used for stationary phases. When heated, such siloxane polymers will form degradation products that will show up in the GC analysis. Such peaks are called “ghost peaks”. 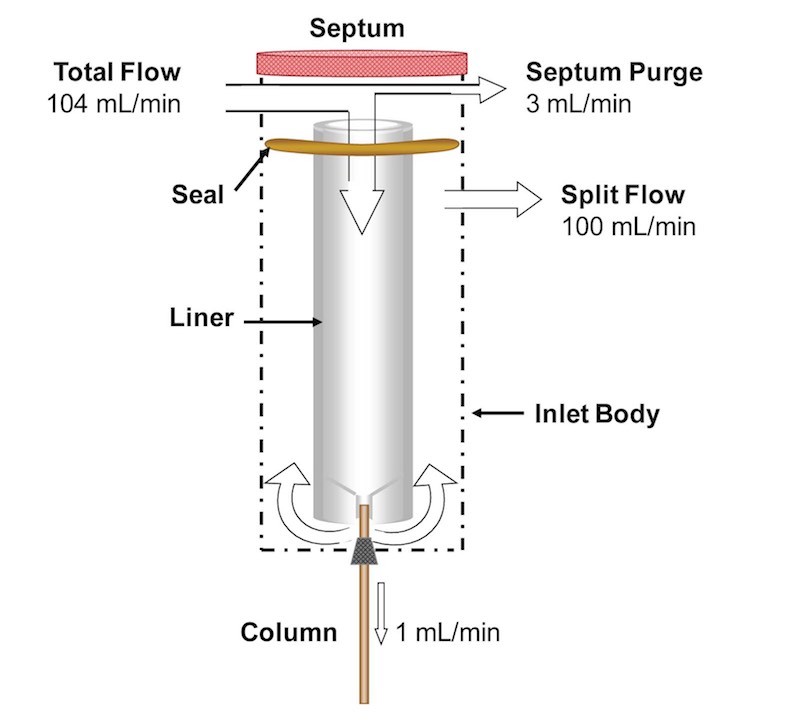 A continuous septum purge - a flow of 3–4 mL/min carrier gas along the septum - will take away the majority of the septum bleeding products.

Using a split / splitless injector in conjunction with a septum purge vent decreases the amount of volatiles that collect on the column. However, direct injection techniques tend to concentrate the volatiles on the column head and amplify bleed: it is extremely important to use low-bleed septum for these applications. It is worthwhile noting that while bleed tends to decrease over time as the septum becomes conditioned, the likelihood of column degradation as the result of oxygen permeating the septa increases.

Over tightening the septum nut causes another common problem. The increased septum compression that results often causes bent needles and septum coring. Fragments from the cored septum can become trapped in the injector or column and result in additional bleed. Unfortunately, such particles will cause not only siloxane ghost-peaks, they will also cause discrimination during injection.

Which septum to use is dependent on the injection port temperature dictated by the analytical method and the septum’s thermal stability. Low temperature septa are manufactured from softer silicone formulations for better resealability and tend to last longer than high temperature septa - however septum bleed is more pronounced. This type of septum is also more susceptible to damage when the septum nut is over tightened.

High temperature septa are recommended to minimize injector and column contamination. Generally, septa should be replaced after 30-50 manual injections or 75-100 autosampler injections. Leaky septa will allow air to enter the column which will rapidly damage the column. Septa will have to be replaced more frequently when using large diameter needles or needles with burrs or hooks. Over tightening the septum cap will also reduce septa life. The column temperature should be reduced to 35°C or less when changing the septa. Reduced column lifetime will result if air is introduced into the carrier gas at elevated temperatures.

..... (Visacon) "In the past we have only offered these products to a handful of the largest chromatography instrument companies. You have probably purchased our products from one of these well-known companies without knowing it was our product.
Originally, we set up our business with one thing in mind - keep the customer happy. We have sold and manufactured our products for over 20 years, and we finally got sick of seeing how much some of the big companies were charging. So, we cut them out. You get the same quality you are used to, but at a much better price."